If you were to search for the term ‘math games’ on google, you would get instant access to many sites where you get the chance to practice skills in the guise of a ‘fun game’. For example, in the game Candy Stacker, you get to practice pretty much any skill in any grade and it stacks cake on top of an animal until it reaches a candy. As with many of these games, it is timed, and you ‘fail’ if you get on wrong. These types of games reinforce the fixed mindset that is so often observed in mathematics classrooms.

There are better ways of building fluency and understanding of number. Number talks and Formulator Tarsia are just two great examples. But, are there activities out there that both have that gaming element, and help build a deep understanding of number while promoting a growth mindset, that depth is more important than speed? Thankfully, yes, and here is a list of growth mindset games that I love my students to play, either in a dedicated lesson or in those moments where you have 10 minutes spare. None of these will have timers or ‘fail’ notices. (Note: There are many great card, board, and paper games out there, but I am going to focus on online interactive activities for this post). Click on the images to go to the game itself.

This is probably my favorite of all, building sense of multiplication tables, but students also quickly come to realize that prime numbers are key in this game.

2 Player version: The winner is the person that can force the other player not to be able to build on the chain, cutting off all possible factors and multiples. Again, are there good numbers to start with? What are the key numbers to minimize the chances of losing the game? 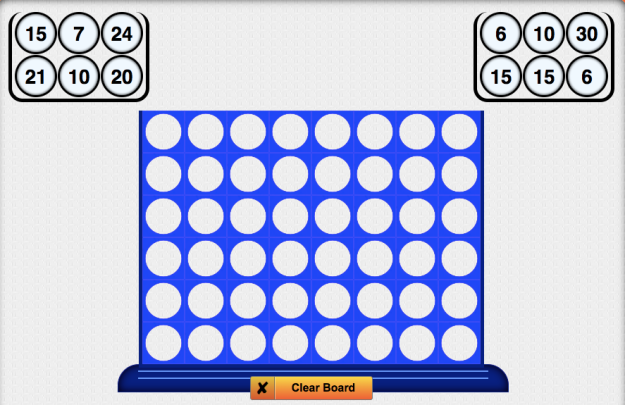 Another fantastic game to build a sense of numbers, factors and multiples. No timer necessary!

One Player Game: Fill the game board with the counters from both boxes. Avoid lining up four numbers with a common factor (other than one).

Two Player Game: Each player has a box of counters to choose from. Take it in turns to drop a counter into the game board. The winner is the first to line up four numbers with a common factor (other than one).

There are probably other versions out there but this one is the best I have found, even if is relatively basic. The idea is simple: Can you get the target amount using the keys on the calculator that are working. The levels get increasingly difficult, and it is a great way of building a sense of operations.

Similar to the popular game on mobile devices, this game builds a sense of base-2 numbers and exponential growth. This one is a favorite with the students. Try to encourage your students to think of and discuss strategies to get further than you would by just trying different ways.

A simple game with less than simple strategies. Once again, try to steer students to thinking strategically. Is there a better addition to start with? Is it better to go first or second? If you want a more challenging version of this game where you can’t choose the option that your opponent last chose, you could try transum’s 23 or bust. 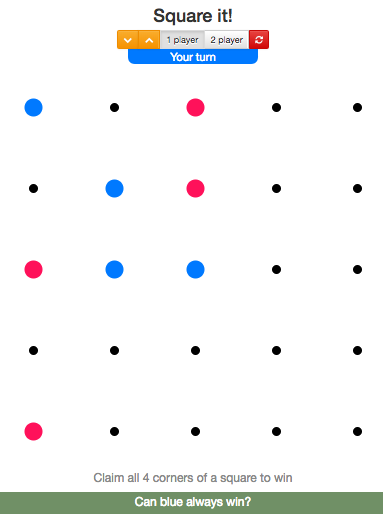 Not a number game, but a great strategy game nonetheless. Students can play either another person or the computer. They must claim all 4 corners of one square to win. Can blue always win? Is there a way to force this every time? What is happening in the middle of the game? What does the end of the game look like?

I hope you enjoyed reading about these growth mindset math games. What are your favorites? Comment in the section below.

First and foremost an educator, aiming for meaningful student-centered learning and teaching in all I do. I use mathematics to try and teach problem solving, communication, risk taking, creativity, and critical thinking. I also host the 360 Podcast – an all around look at student centered education, and used to host the MathEd Out Podcast.  I have blogged for various sites including the Guardian’s Teacher Network. I tweet @Pumphreysmath