I used to teach high school. I would often see students who struggled to see:

Thanks to teacher and activity creating genius Fawn Nguyen, we have a way to address this problem. I now run a visual pattern activity at the start of my lessons, every Wednesday. Just a few weeks into the semester, I am already seeing the above gaps filled!

We have started mainly by mainly using linear patterns with constant differences. Now that this link is pretty strong I have started to introduce increasing differences and they are quickly getting the idea of a curved relationship on the graph. I have created this sheet to help organize the students thinking. I give them 4 minutes to think on the problem by themselves and 2 minutes to discuss their ideas. Then as a class we ask and discuss: 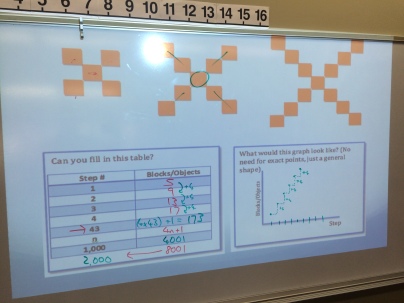 I am quickly finding that, by accident, students are solving equations and building up a sense of the need for processes such as factoring, finding the inverse and finding the slope of a line. I have found I am able to coherently validate the need for calculus, 5 years before they take it. I believe this will really help my students when I run lessons such as Dan Meyer’s toothpick activity, later in the year. Sure this is just similar to the explicit/recursive rule section of particular algebra textbooks, spread over a year, but I think a regular discussion on this idea is crucial to making connections and getting the deep understanding needed for algebra and beyond.

I am excited to hear if it has made much of a difference, next year and into the future. I suspect it really will.

First and foremost an educator, aiming for meaningful student-centered learning and teaching in all I do. I use mathematics to try and teach problem solving, communication, risk taking, creativity, and critical thinking. I also host the MathEd Out Podcast, run professional development events for midwest mathematics teachers, and have blogged for various sites including the Guardian’s Teacher Network. I tweet @Pumphreysmath