I was so proud I had it framed. My summer school’s attempt at faking a Jackson Pollock was a great success. I don’t think we are going to make millions anytime soon, but more importantly a bunch of young people now know that the world can be viewed through the glasses of fractal geometry

It’s the end of summer school session 1 and I wanted to give my students a taste of the beauty and power of fractal geometry. Rather than just play a TED talk (although this helped with the introduction) I wanted them to live through the process.

I know that fractal geometry has been used to spot fake Jackson Pollock paintings and thought it would be fun to look at the method behind this and to see if my students could use what they have learned to try and create their own ‘Jackson Pollock’. Here is a summery of what we did, spread out over a 2 day period (in between normal curriculum activities).

‘There were two reasons to suspect that Pollock’s paintings might obey fractal geometry. Moving around a large canvas laid on the ground, the artist let paint fly from all angles, using his whole body. Human motion is known to display fractal properties when people restore their balance, says Taylor, and films of Pollock seem to show him painting in a state of ‘controlled off-balance’. Second, the dripping and pouring itself could be a chaotic process.

“Pollock was in control,” says Taylor. The large-scale fractals are a fingerprint of the artist’s body motion, he notes. “But the small-scale fractals are also to do with his choices — his height over the canvas, the fluidity of his paint, angle and force behind the trajectory, and so on.”’

The real magic was when we took a photo of the canvas and zoom in several times to see if we have replicated the infinite properties that Pollock created so well. Here is a video of the class starting the painting (and getting pretty covered in paint in the process).

Here is the end result and the zoomed-in versions. 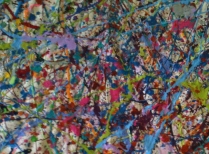 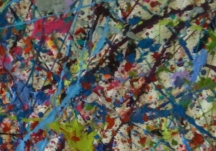 I appreciate we’re not going to win any awards with this art but from a geometry point of view, I was really happy with the results and so were the students. The zoomed in photos do not look all that dissimilar to the painting as a whole.

I will be, of course, asking the school to display this somewhere. There is part of me that hopes they decline so that I can take it home with me. Apart from anything else, it was great fun!

A huge shout out to local artist, Quincy Owens, who helped me to set this up and provided all the materials we needed.

Have you done something similar? Any suggestions on how I can improve on this for the future?

First and foremost an educator, aiming for meaningful student-centered learning and teaching in all I do. I use mathematics to try and teach problem solving, communication, risk taking, creativity, and critical thinking. I also host the 360 Podcast – an all around look at student centered education, and used to host the MathEd Out Podcast.  I have blogged for various sites including the Guardian’s Teacher Network. I tweet @Pumphreysmath